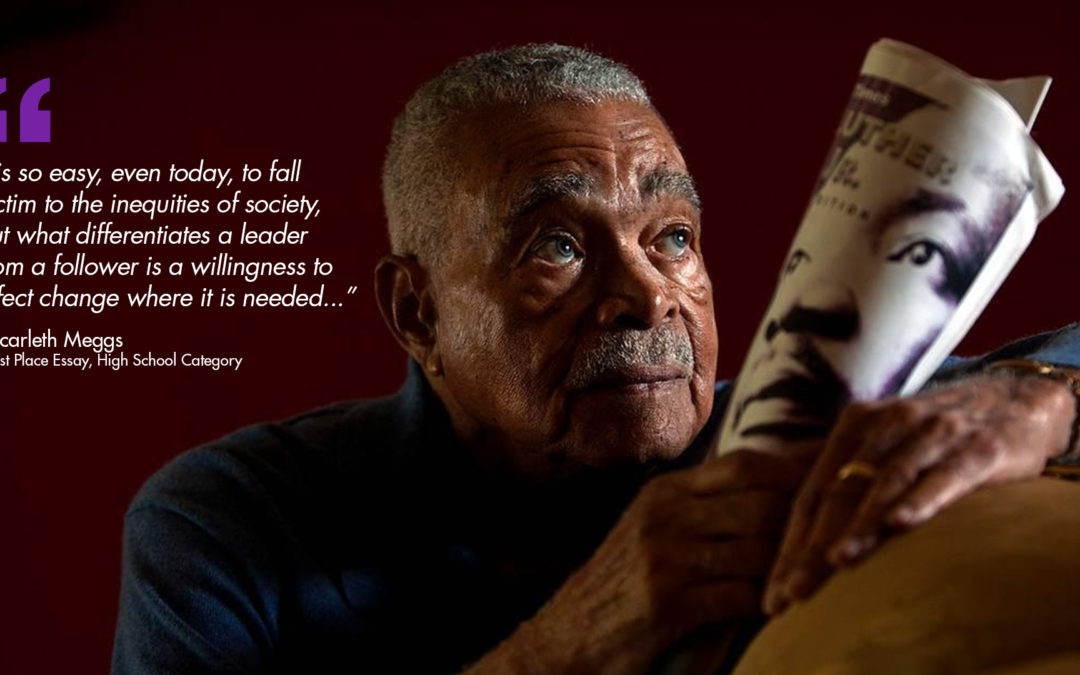 We are pleased to announce the winners in each category.

The essay contest was established to honor Dr. Reeves, publisher emeritus of The Miami Times, who passed away at 100 in late 2019. As the only job he had, aside from serving in the Army during World War II, Reeves’ energy in running the landmark black-owned paper would impact the lives of countless families in South Florida. He’d found his life’s calling — to serve as a voice for the black community. He knew no better job. Reeves, who oversaw the black-owned paper his father initially printed one page at a time on a small hand press in a modest Miami home upon its founding in 1923, and who kept it in the family as it evolved into its digital edition today, died two months after his daughter, Rachel, passed. She was the publisher of The Miami Times, assuming the mantle of leadership from her father and grandfather. (Miami Herald, November 2019) Breakthrough Miami is proud to have Regina Jolivette-Frazier, Reeves’ niece, as a long standing member of the executive committee of our board of directors.

Garth C. Reeves, Sr. is a tall tree in the forest in which his community sought salvage from the elements. His work in the publishing world and ultimately his founding of the Miami Times gave voice to countless stories otherwise untold. What’s reflected in the sentiments of our scholars in their essay entries is a resonating theme of perseverance, hard work, and justice, similar themes found in the ethos of Breakthrough Miami programming. Our scholars did a wonderful job making the connection between the lessons learned from researching their chosen pioneers and what they continue to learn as Breakthrough Miami scholars. Below, are a few excerpts from our winning essays that demonstrate just that.

Garth C. Reeves, Sr.: How one man helped his entire community. Garth C. Reeves, Sr. was the publisher of the “Miami Times” after World War II. Before that, the head of the newspaper was his father, Henry Ethelbert Sigismund Reeves. Garth became an African-American voice, an important voice for his community in Miami.  Reeves wasn’t born in Miami. He was born in the waters of the Caribbean, on the Island of Nassau, Bahamas. And he grew up in the popular neighborhoods of Liberty City and Overtown. He came to Florida when he was 4 months old.  His father created the “Miami Times” on September 1st, 1923. When Garth returned from WWII, he encountered a very racist Miami and he wanted to move. He made a list of places that were kinder to African-Americans than Miami, but his mother, Rachel Cooper, opposed the idea to leave Liberty City.  When I was investigating the backstory of Mr. Reeves, one of the most interesting and disappointing things I found was an interview with him that quoted Mohamed Hamaludin (a journalist that worked at Miami Times). “Mr. Reeves said that when he was getting off the WWII ship the Whites and African Americans were in different lines. Even though they both fought bravely for their country, they were still treated differently because of the color of their skin. This infuriated him.” My mom taught me we can only do one thing against problems and injustice –  “fight against them”. This was precisely what Reeves experienced with racism. It helped him become the activist that he was beginning to become in the Civil Rights Era (1954–1968). In a speech he said that he wanted to fight racism in a city where racism has been kept for hundreds of years. In a form of protest, he went to a “white” beach. He expected to be harassed and reprimanded but that never happened. Shortly after those protests all the African-Americans could visit the beach.  Mr. Garth C. Reeves, Sr. was an inspirational figure his entire life. It is very sad that in this era minorities like Latinos, African-Americans, and any non-white race were discriminated against. To me and many other children from minority groups, he is a great example of a leader. If there are people like him, ideas like his, and programs that are like Breakthrough Miami, the discrimination may finally end in this country. The free press is very important to society because everybody should voice their opinions in a democracy. The Constitution of the United States of America states that every person has the freedom of speech whether they are Latinos, African-Americans or from any other  minority community. Mr. Reeves used  freedom of speech to help and support African-Americans. With his newspaper, he helped his entire community. When I am an adult, I hope to help my community in the same way that Mr. Reeves did. Maybe I won’t use a newspaper, but I will use something equally as powerful. 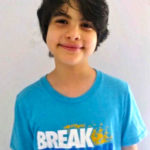 Ivan Reyna, Grade 5 South Miami K-8, Breakthrough Miami at Ransom Everglades School
Visionary “Too much racks in my pocket that my wallet can’t fold”, “I rock ice”, and” It’s all about the Benjamins” these are all things you may hear present-day millionaires say.  Fortunately for us, Miami’s first black millionaire, Dana Albert (D.A.) Dorsey wasn’t one for bragging but demonstrated wealth by helping others.   Dorsey was a man of very humble beginnings.  Through his hard work and vision, he gained his fortune. He provided help and resources for many black families using his wealth. Dana’s modest start served as the first chapter in going to where others could not go.  He was born during a tough time in Quitman, Georgia. Although he was the son of two former slaves, he was the first one in his family to not be born a free man. Dorsey didn’t have much of an education. The highest grade he completed was the fourth grade.   As tensions in the South rose many families migrated away from Georgia. Dorsey’s landing spot was Miami. He proceeded to become a carpenter working for the Henry Flagler Florida East Coast Railroad. This humble foundation led him to the next chapter of his life. John Wanamaker says “one may walk over the highest mountain one step at a time.”  D.A. Dorsey became a millionaire by taking one step at a time.  From the money he made working on the railroads, he bought a property and built a house and rented it to black families in the area now known as Overtown.  He then took the money from the rentals to buy more property and rent more houses. He was very successful because many black families migrated to the area.  He also opened the first Black hotel in Miami, the Dorsey Hotel, and was the owner of Negro Savings Bank.   Dorsey was a visionary who found multiple ways to climb the mountain of success. He was a huge supporter of the black community.  Many of the properties that he owned he used to support education, learning, and recreation for African Americans.  One of his properties was sold to the City of Miami, which became the first black park in Miami.  He donated land for a black school and library. He felt education was very important.  He once owned Fisher Island. The plan was to build a resort on the first black beach in Miami.  Dana ended up selling the land. The only way to reach the island is by water and blacks had no way to get there.   Dorsey died before he got to see a beach designated for blacks, but in 1945 Virginia Key Beach became just that.  Ironically, there was a tunnel built connecting Virginia Key Beach to the very wealthy Fisher Island. It was appropriately named the Dorsey Tunnel.  He is truly the bridge that connected African Americans to wealth in South Florida.   Dorsey is the first black millionaire in Miami but did not get there overnight.  D.A. Dorsey had a self-effacing start to his life, he gained and envisioned a blueprint to gain prosperity, and was a provider in Miami’s black community. 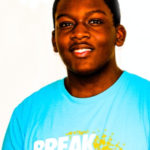 Access to emergency medical treatment has not consistently been a guaranteed right, especially to African Americans in the 1900s. Black people were not allowed to get medical assistance or an education despite their needs or qualifications. Few, however, did manage to enter white-owned and operated schools and hospitals and become doctors and physicians. These few African-Americans dealt with racism on a day-to-day basis and were ostracized by others despite having similar qualifications. These were the conditions black people faced: you had to work two times harder than your white counterpart for everything you wanted. Dr. James Sistrunk did just that.

After serving in World War I, Dr. James Sistrunk moved to Florida to practice medicine; however, despite being a qualified surgeon, he was not allowed to perform surgical procedures in white hospitals. The easiest course of action in response to this would be to find another career, but the perseverant veteran had other plans. At the age of 48, Dr. Sistrunk helped establish the first hospital in Fort Lauderdale for black people. The facility, Provident Hospital, was where he delivered over 5,000 plus babies over more than four decades of practice. Outside of the facility, he would often go on house calls to help those who were unable to pay for medical treatment. This hospital broke racial barriers by instituting a training program for black medics during a time where white hospitals wouldn’t allow them into the building. Dr. James Sistrunk was not only a pioneer in the medical field, but he was also a hero in the lives of many African-Americans who had a right to medical care but were unable to receive it as a result of the injustices of America’s racial caste system.

His story, and others like him, is one of struggle, perseverance, and hard work, and he had the mind and heart to embark on a journey that few were brave enough to take on. It is so easy, even today, to fall victim to the inequities of society, but what differentiates a leader from a follower is a willingness to effect change where it is needed, the same way Dr. Sistrunk did. Instead of giving up because he was not allowed to work in a white hospital, he went on to make his own hospital, one where those who were tossed aside were quickly taken in and treated.

I can catch a glimpse of myself in the story of Dr. Sistrunk. Everyone should take a page from the book that is his life and incorporate it into your own stories. Doing so would add inimitable skills and strengths that could propel someone to unparalleled success. I would adapt his perseverance into my life and safeguard my and others’ right to a good education, something I value more than anything in the world. Where I am from, not everyone has adequate access to education, in the same way African-Americans didn’t have access to medical treatment in the 1900s here in Florida. Like him, I want to effect change in a system that unrightfully puts those of certain socio-economic standings on the back burner. The service Dr. James Sistrunk provided for my community is unbridled, and I hope to follow in his footsteps by making a change in my community in the future. 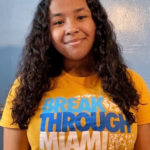 Join the Breakthrough Village. Change lives. Create Leaders. Transform our Community.
Breaking through starts with you. Get involved and make a gift today.